Find your next office

We talk to Eigen Technologies about end-of-an-era Series A moments, finding a new New York office, and the teambuilding power of a good kitchen

Ever been the one who stocks the office fridge? You’ll know that the goal is set-it-and-forget-it, with the joy of automated grocery deliveries...

So when Eigen Technologies discovered they had to double their milk order from one week to the next, they were surprised.

Their headcount hadn’t doubled in size overnight. What was going on with the milk?

Turns out it was good news. They had just moved office, and their new kitchen was such a draw that people had started to eat breakfast there instead of at home.

We’re catching up with Julia Suiter, Eigen’s office manager and facilities manager, and we can confirm: it’s a very lovely spot for tea and a chat.

“Our old office was split across several floors. Now we’re all on one floor, it’s much better for relationships. This is a watercooler area for us. Always busy, a place where people from different functions mingle. Science, marketing, engineering, getting to know each other, getting interested in what others are doing and sharing perspectives from across the business. And a really good coffee machine helped…”

Right now Julia is talking about their London office.

However, we’re mainly here to talk about their US office, which we helped them find (a fully-managed flexible Knotel for 50+ people). 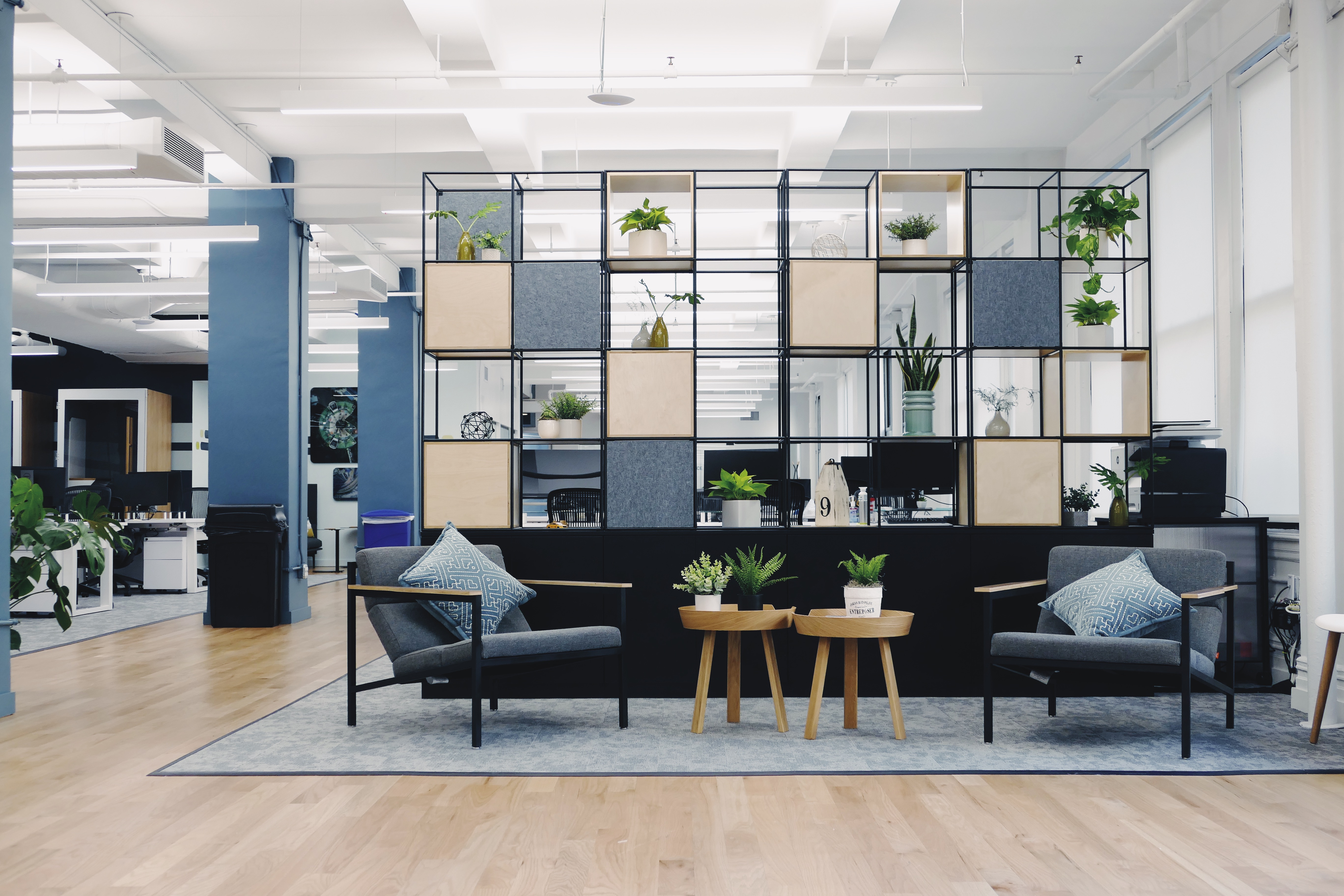 As luck would have it… both locations boast a fabulous kitchen, and both were chosen to help the teams work well together through times of growth and change. Eigen Technologies closed their £13m Series A round in June 2018, and there are no signs of slowing down. [Side note from the future: in fact, they announced their Series B a few weeks after this interview.]

They moved into their new NYC HQ on the 4th of October 2019, and we’re excited to hear how it’s all going.

What triggered the search for a new New York office, and what was that experience like?

At the time, Julia explains, Eigen Technologies were based in a small unit in NYC’s Soho area. The space was originally designed for storage, but people rent them out as offices.

“The unit served us fine when we were smaller, but as the team grew, we needed to integrate the NY team with the London team, and we had to find a place that would reflect that. We wanted to feel like the same company whichever country we’re in.”

But where to start? How to start? Julia admits they didn’t know all that much about the process of getting an office in the US.

“We’d heard it was quite different to the UK. We needed some guidance! Not only to find the property, but also about how commercial real estate works over there. We gave Kontor an idea of the size and areas we were looking at, but we didn’t really know. At the time, we were only a small company in NY and growing. We saw a mix of leased buildings and serviced buildings…” 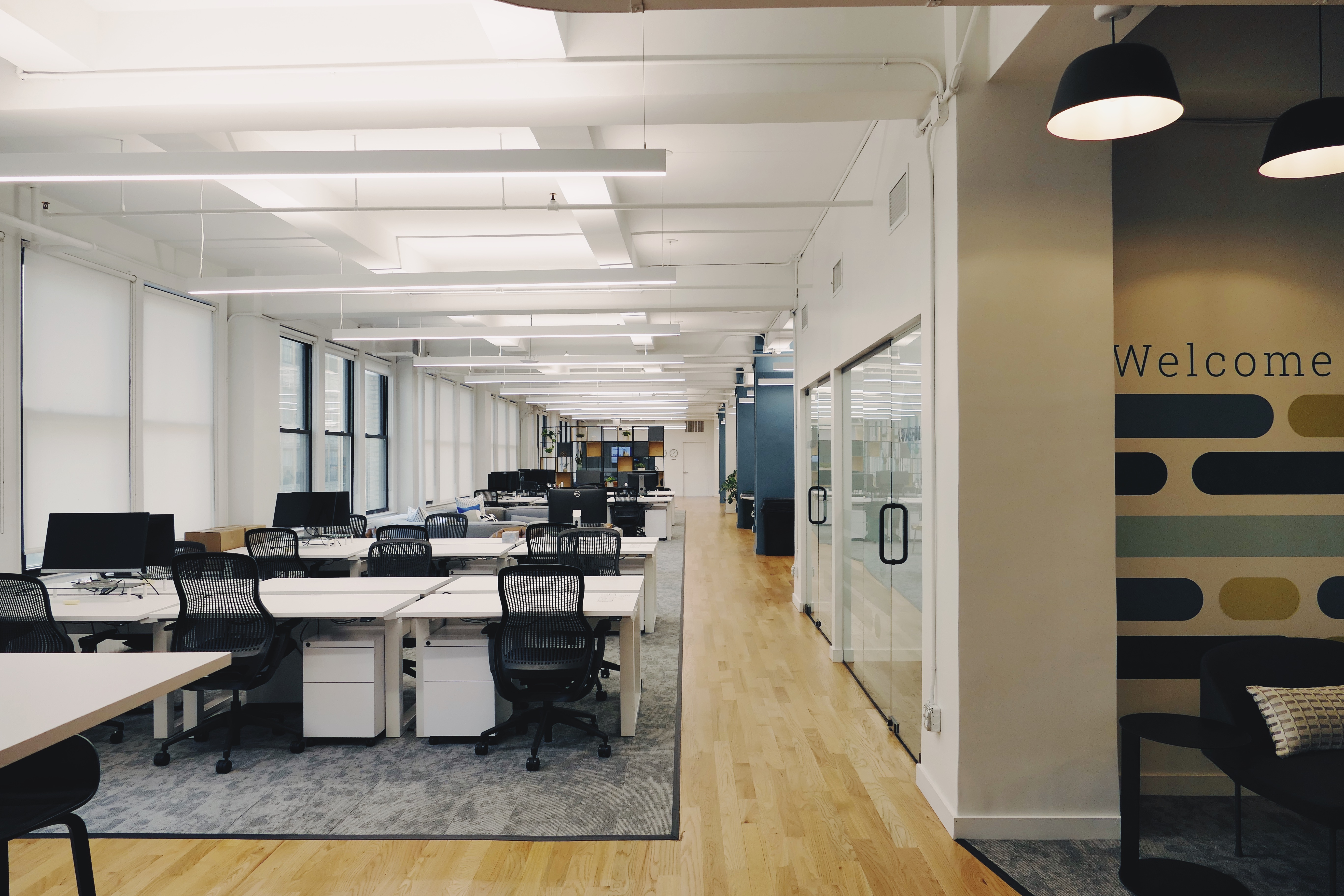 What swung the decision to go for a fully-managed flexible office?

Julia describes the challenge of predicting the future. As things stand today, office leases tend to be longer in the US than the UK, with most starting at 5 years. For a newly funded scaleup, that’s an eternity.

“In London we have a very structured trajectory over the next 3 years, whereas New York is more unknown. We need more flexibility there, so a rolling agreement for one or two years suited us down to the ground. Knotel ticked all the boxes and everybody really loves the space! When you’ve come from an office that isn’t up to scratch any more, it makes a real difference.”

Any advice on how to make the most of the change of scenery and get off to an awesome start in a new office?

Julia describes a mix of big things and little things.

There are ways to make a great first impression, like having an open day for the teams before the official move-in date:

“We did this at both our offices in London and New York once they were set up to look amazing. We had a champagne reception... Knotel did a mimosa bar... so people could wander round and get to know their new environment before the official start date, get excited, explore their workspace, imagine what it’ll be like on Monday. They deserve it. Some people have been at Eigen since the start. They’ve come from our first office with mice and holes in the floor, wearing coats because it’s so cold! Eigen’s success is partly down to them. Their determinedness has got the company to where it is today.” 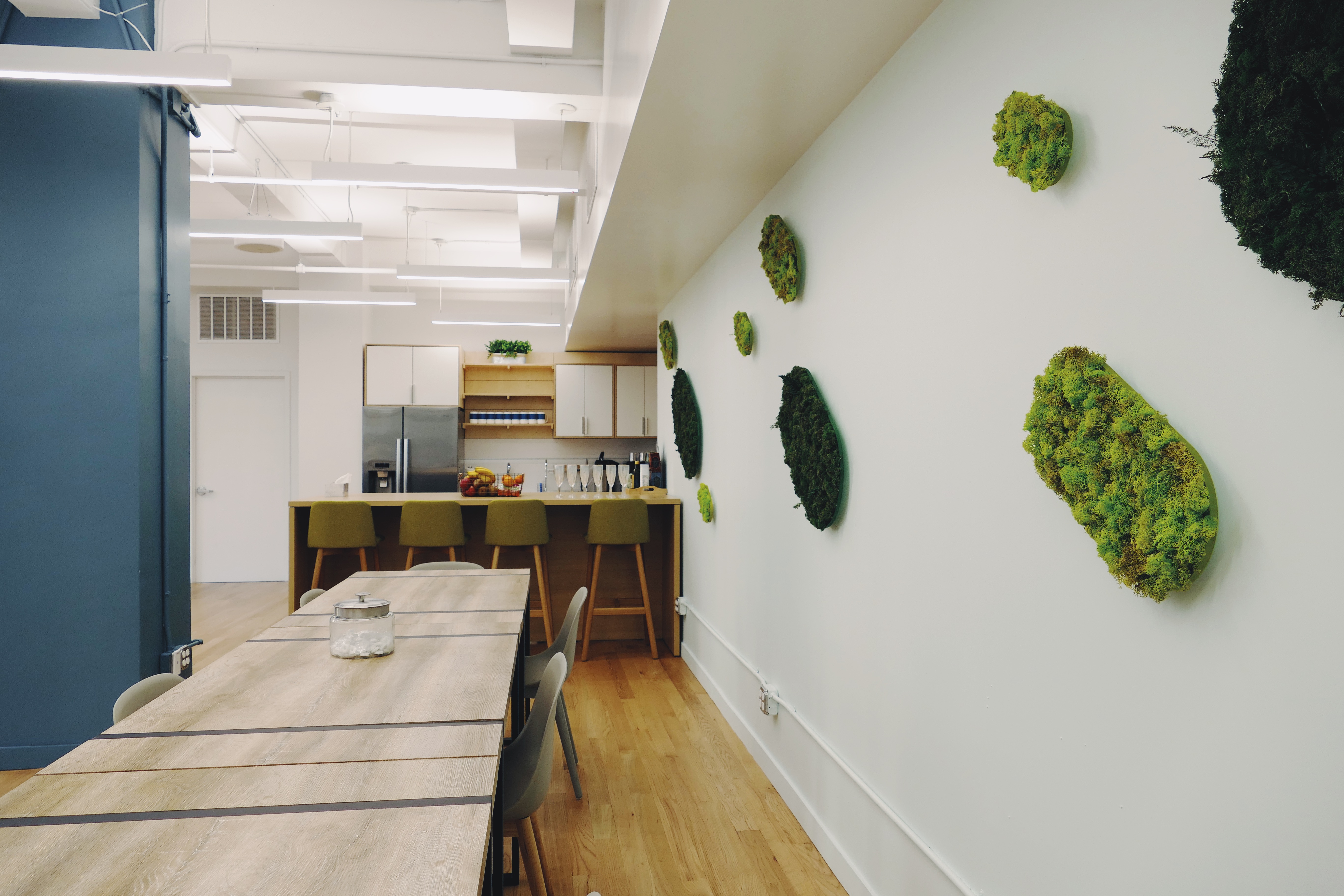 And there are smaller considerations that add up quietly too:

“We have lots of different characters here! It’s important to think about how the people and teams are going to work together. Some teams are more quiet-loving and introverted and prefer a cosy corner, so I’ve worked hard to accommodate individual needs. And although our Knotel office came with a couple of phone booths for the sales team to use, we bought some extras, for example.”

It’s good to know that the devil is in the detail. We’re aware that not every company has the time, resources and financial footing to put on an open day for a new office. But while we’re on the topic, we’re interested to know more about Eigen’s Series A round ($17 million back in June 2018). 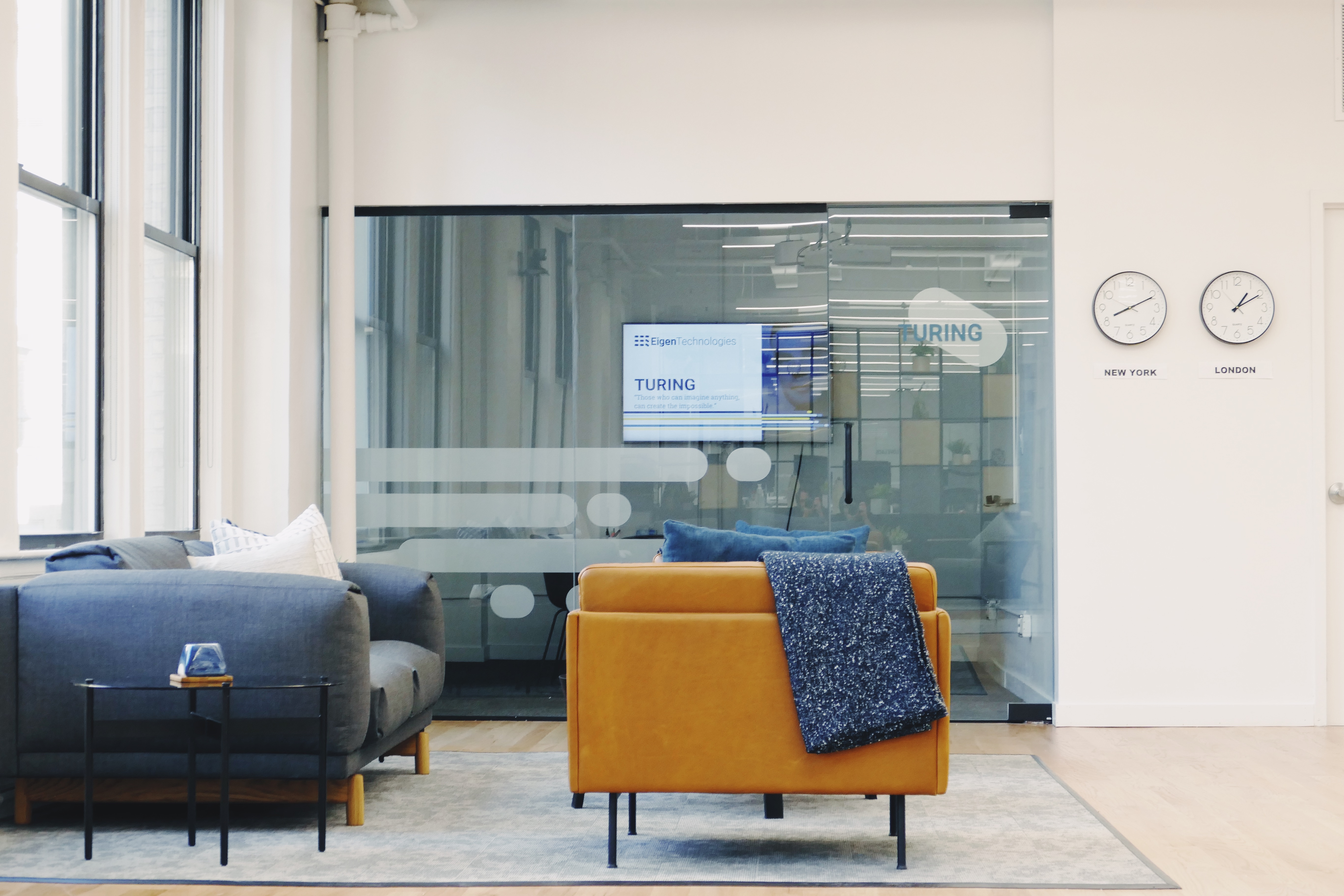 How did Eigen’s Series A impact the working environment?

Julia is thoughtful. As you might expect, there’s a general story of growing up.

“Before our Series A, in many ways we were winging it. We were a company of people who were all on the same team and going for the same goal but putting out fires and dealing with things retrospectively. We wanted to be able to prevent the fires in the first place. We recognise that’s all part of startup life, but when the series A money came, we looked at hiring at management level to give guidance and direction.”

She talks about how the dynamic changes when you hire more people and bring more structure to the teams, and the challenge of weathering this adjustment.

“We’re still a close-knit bunch and we try to maintain that. But as you grow each team from a handful of people to 10 or 12 and add a “chief” to every function, the natural reaction is “but we’ve always done it that way not this way in the past”. That doesn’t necessarily help a company progress to the next level. Sometimes people move on as the company continues to evolve - they realise they’ve done as much as they can here, or that it’s no longer the right place for them, and that’s OK. It can be hard, but it’s an organic progression. We resolve things as we go. For a growing company, these end-of-an-era moments are a part of life.”

Well, here’s to the next era of Eigen Technologies. Thanks so much for speaking with us Julia, and all the best for the next chapter! 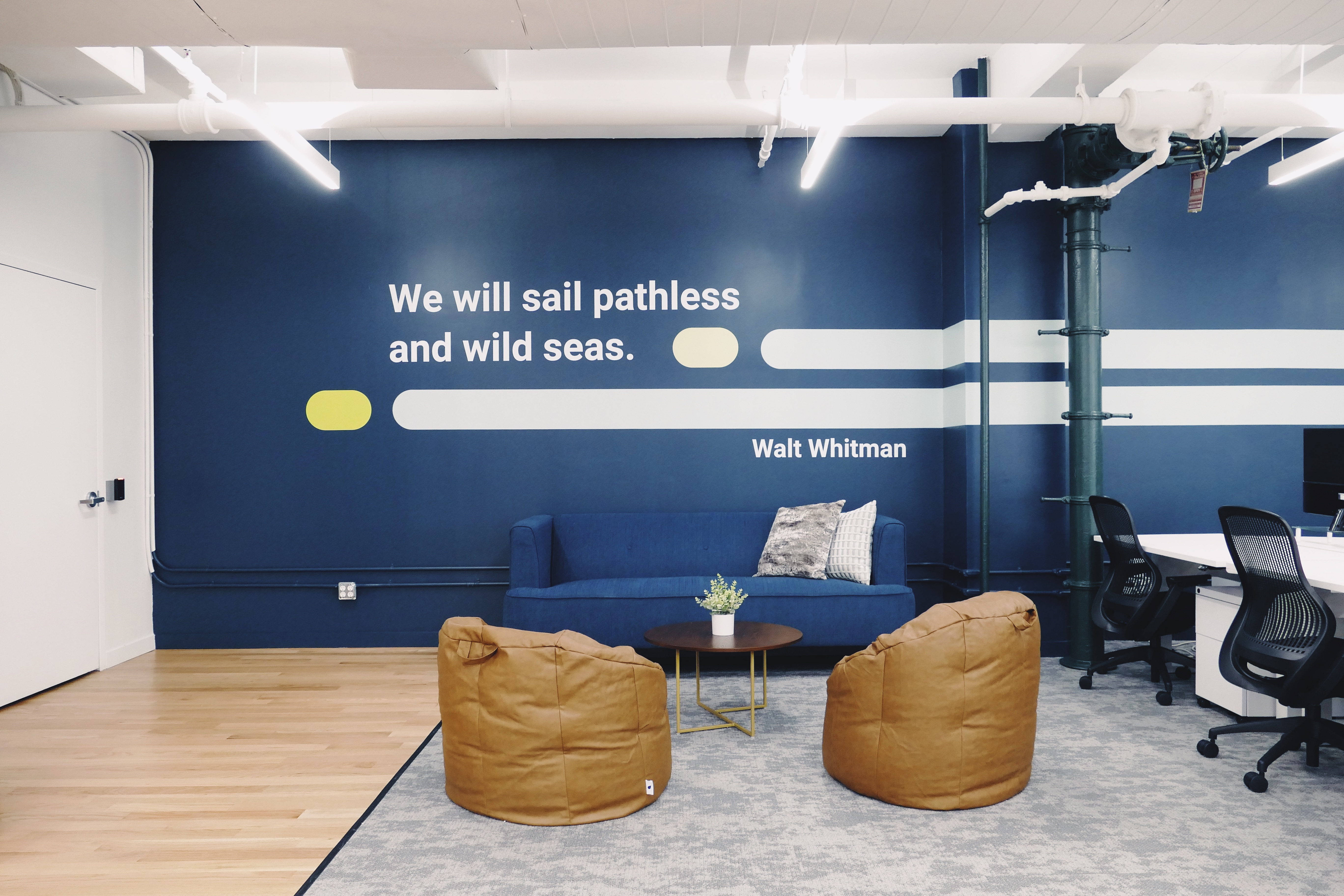 We'd love to help you smash this awesome milestone.